Chiang Rai White Temple or Wat Rong Khun allures visitors by its breathtaking architectural beauty. At first glance, your heart will race against time seeing this fully white structure; the exterior is so perfectly designed, it more or less appears to look like a frozen temple. It has a curious design symbolizing life and death. The premises has a bridge of “the cycle of rebirth” and below you can notice outreaching hands. Likewise, there are many statues and symbols each having meaning of its own and in order to truly understand the depth of Wat Rong Khun, a visit here is a must. It has since been re-opened, with non-Thai visitors now being charged an entrance fee of 50 THB, a nominal price I would gladly pay to preserve this spectacular masterpiece by local artist Chaloemchai Kositpipat.

Inside the temple, the decor swiftly moves from pristine white to fiery and bewildering. Murals depict swirling orange flames and demon faces, interspersed with Western idols such as Michael Jackson, Neo from The Matrix, Freddy Kruger, and a T-800 series Terminator. Images of nuclear warfare, terrorist attacks, and oil pumps hammer home the destructive impact that humans have had on earth. The presence of Harry Potter, Superman, and Hello Kitty confuses the message somewhat, but the overall moral is clear: people are wicked. 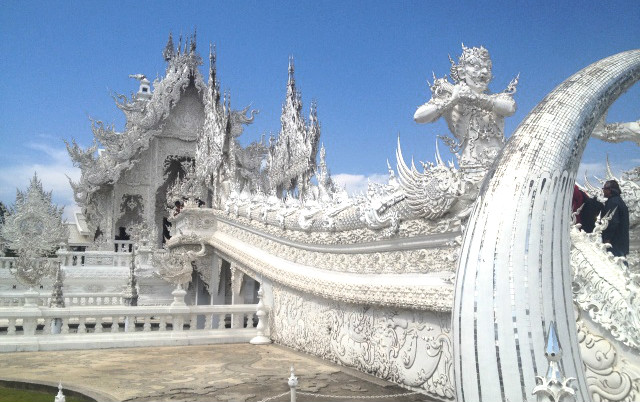 Kositpipat’s juxtaposition of traditional Buddhist imagery and pop culture has drawn criticism from the Thai government. Photography of the interior murals is prohibited, but visitors are welcome to purchase prints in the temple gift shop.

On May 5 of this year, a 6.3-magnitude earthquake struck Mae Lao, located 17 miles southwest of Chiang Rai. Wat Rong Khun sustained significant damage, and a devastatd Kositpipat initially declared that the temple would have to be demolished. Subsequent evaluations, however, have found that the cracked pillars, damaged murals, and broken spire can be repaired. The restoration process is expected to take about two years. Travelers can still visit the temple, but may not be allowed inside depending on the work being undertaken at the time.

Visit Beautiful Zoo of Safari World Bangkok Bangkok is well known as the gateway to Southeast Asia. This city has ...
View Package

Visit Most Famous Attraction of Nong Khai in Thailand

Visit Most Famous Attraction of Nong Khai in Thailand Due to its close proximity to Vientiane, most people stop off here ...
View Package

Visit Beautiful Place of Krabi Town in Thailand A small city in the Malay peninsula, Krabi Town is an authentic ...
View Package

Visit Beautiful and Mesmerising Temple of ubon Ratchathani in Thailand

Visit Beautiful and Mesmerising Temple of ubon Ratchathani in Thailand Lying on the banks of the Mun River, Ubon has ...
View Package

Visit Best Experience of Surin in Thailand Despite its small stature, the city of Surin surely punches above its weight ...
View Package

One of the Most Important City of Chiang Saen in Thailand

One of the Most Important City of Chiang Saen in Thailand Deep in northern Thailand and just south of the Golden Triangle, ...
View Package

Most Amazing Destinations of Mae Sai in Northern Thailand The northernmost destination in all of Thailand is Mae Sai. The ...
View Package